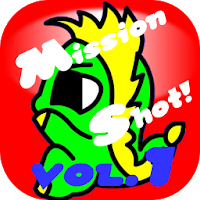 It is a shooting game that launches the bullet to the place touched.

It is a game application program that has the sense of a certain meaning sports from which a stage that progresses by the mission form and strong reflexes are demanded.

Intercept the crowd and aliens of the bird that attacks it one after another.

The bullet is launched to the place touched.
Simple operation feeling. It is possible to enjoy it by uplift and the large excitement.

Your head is made full by exhilaration one feels.

Stage that progresses by mission form.
It puts on an agreeable sound, and it ..retro.. plays a game.

If the enemy is intercepted, the bullet is replenished.
The high score can be acquired by sounding can taste exhilaration one feels and sounding if the enemy is defeated at the right of the screen.

Can you reach it at last to the last minute?
It prays for the good fight.

The story of the mission shot started here.

It is possible to enjoy it according to your lifestyle.