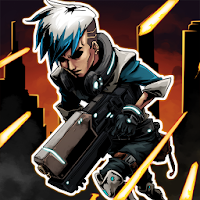 The year is 2842. Organized crime is now in the hands of four gangs who control the large cities from their underground bases.

You are the main Enforcer of one of these powerful gangs.

Your gang's territory operations are being badly disrupted by the other gangs.

We cannot allow this situation to continue and you must take action now!

Future Shooter is a futuristic arcade side-scrolling shoot-em-up. Select your gang character and blast your way through campaigns!

Send any feedback or problems to -
Email : dancingcatdev@gmail.com